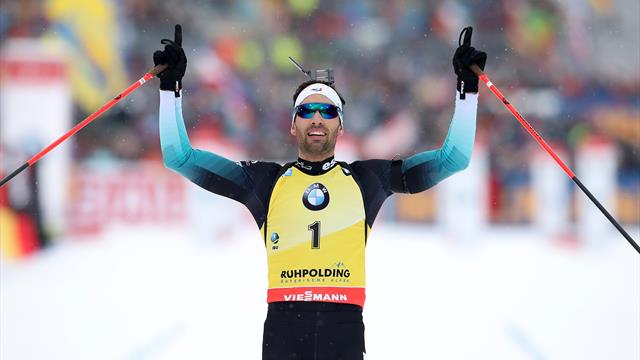 Five-time Olympic champion Martin Fourcade has announced his retirement from biathlon at the age of 31.

Fourcade has been locked in battle with Norway’s Johannes Thingnes Boe all season for the overall title, with the final pursuit on Saturday set to be the decider between the pair.

However, Fourcade has decided that this particular battle will be his last, announcing on social media on Friday evening that he had come to the conclusion to retire following Saturday's race.

Fourcade is France’s most successful Olympian, a thirteen-time world champion and holds the record for the most Overall World Cup titles with seven.

Last season Fourcade struggled drastically for form and fitness but responded in style this season, pushing new dominant force Boe to the limit in the World Cup and took two golds at the 2020 World Championships at Antholz.

Fourcade touched on the way the sport tested him in his statement and paid tribute to his support team, as well as friends and family and those he competed against.

He also highlighted his responsibilities as a father, echoing another snow superstar, Marcel Hirscher, who retired at the start of this season.

There are life-changing decisions.

I have often wondered if this was the case when I first climbed on skis 30 years ago in my native Pyrenees. I think that I simply followed this trail in the snow drawn by my brother Simon, like many little brothers ... I was encouraged by these sensations of sliding and the happiness of evolving in this extraordinary environment. I liked that. Passionately…

Little by little, thanks to decisive meetings and to satisfy my taste for competition, I started to make my own mark. The one who shaped me as an athlete but above all as a man. The one that allowed me to gauge myself, to measure myself, to know who I was. To build me.

From Vancouver to Oslo, facing Ole Einar Björndalen, Emil Svendsen, Anton Shipulin, Simon Schempp, Johannes Boe and all my other adversaries - too numerous to mention all of them - I have fulfilled my dreams and experienced the most beautiful emotions. I fought and I won. I suffered, too. I fell and got up. Above all, I grew up. By having the incredible chance to see my sport grow. From extraordinary television audiences to the popular success of the World Cups in Le Grand Bornand, I experienced a wonderful ascent in France and elsewhere. The sport that I love, to which I have dedicated a beautiful part of my life, and which in return has given me everything.

I could have stopped the day after the 2018 Olympic Games, crowned with three new gold medals, but I still had to follow this initial trace. She heckled me well last year but this turbulence allowed me to grow even more. I had to experience this notion of resilience until I garnered two magnificent additional titles at the World Championships last month. Alone first and above all with the French team. With Émilien, Quentin and Simon, with Fabien and Antonin. With the whole team. Thanks to all those who preceded us and to all those who will follow us.

Bouncing back to get there, at these moments of shared happiness, was the biggest challenge of my career. I believe this last mission has been accomplished, whatever the outcome of this season.

My will to give the best of myself and to climb mountains is always present but the continuation of my construction as a man, as a father, must now go through other ways, other supports of expression.

My passion for my sport is intact. My love for sport in general, and the values ​​of transcendence and respect for others that it transmits, is greater than ever. It is in this universe that I want to continue to express myself, to invest myself, to share.

When I say goodbye to you, I am so moved but soothed. I remember these places, these faces, these emotions that have marked my career. These doubts and trials that I overcame, these dreams come true. I leave a part of my life behind me animated by all that remains to be built.

I also want to give more to those who have helped me so much because, in twenty years devoted to biathlon, I have learned that our relationships are a decisive part of who we are. I would like to thank my family and in particular my wife and my daughters for their sacrifices and their unconditional love. Thank you to my parents for accepting my choices, to my brothers for pushing me, each in their own way, to become better. Thanks to my opponents and teammates. Thank you to my team (coaches, physiotherapists) for being with me as if you were in my place on this starting line. Thank you to my partners for making this possible. To the media for accompanying us.

Finally, thank you all, in France, Russia, Germany, Norway, the Czech Republic, Italy and wherever you are; thank you for encouraging, supporting, loving me. You have transformed this individual career into a collective adventure.

It's time to say goodbye. Thank you for this trip.