Van Avermaet 'happy' with form as he targets second Paris-Roubaix 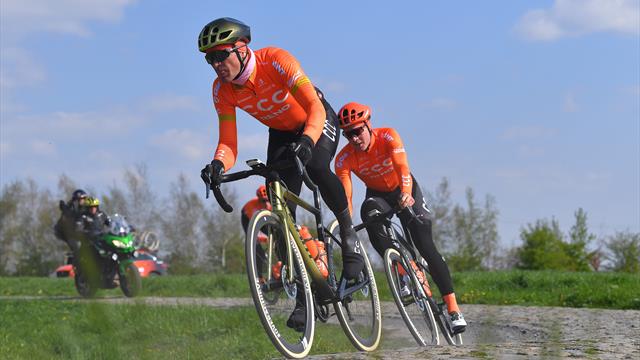 Greg van Avermaet is confident his team can propel him to a second success in Paris-Roubaix.

With his diverse talents, one triumph at the same event two years ago, seems a meagre return. However, he has notched up four top-five finishes in six years.

Although there have been question marks surrounding his team, CCC, Van Avermaet is adamant they can stand up to the test.

And he reckons that his team haven’t been at fault for his near misses this term, which have included podium finishes at the Omloop Het Niuewsblad and the BinckBank Classic.

He said: “I’ve not lost a race because of my team this year. They were always quite good.

“OK, there were some races when they could have been better, but there's not a big difference.

“For Sunday, we maybe have an even better team because we have bigger guys."

Discussing the difficulties experienced at the Tour of Flanders, Van Avermaet continued: “I hope to make the difference by myself and have a gap.

“That didn't work at Flanders, but I don't know why.

"The race was hard enough, especially after the Muur, where I did a lot of work. "

“It just didn't work. It was a strange Tour of Flanders, but the level of the riders is super high, as you can see if you look at someone like Kasper Asgreen, who is just a helper, but you saw how far he could go.”

Van Avermaet reckons he has learned a lot from Flanders and that will stand him in good stead for Paris-Roubaix.

He added: “I'm happy with my legs. I was really good at E3 and at Flanders. I couldn't make the difference in Flanders, but who could?

“Only Alberto Bettiol [EF Education First] could get away, so I have to be happy with my shape, even if I'm not that happy about the result. I'm here with Roubaix and Amstel Gold as goals, and I wouldn't want to change anything about my form.

"For me, it's always best if I can get away with some really strong riders because then I can get a good result. It just didn't work out like that at Flanders."