Tour de France 2020: Route, stages and how to watch

The rescheduled Tour de France started on August 29 and finishes on September 20, with the race following exactly the same route that was announced before the Covid-19 pandemic.

Where can I watch the Tour de France?

Eurosport's team of cycling experts will bring the race to life with knowledgeable commentary and informative analysis, and a post-race show will also be available online or via the Eurosport Player stream.

What are the notable stages?

There will be eight mountain finishes in the Tour and just one Time Trial. However, that Time Trial may prove critical, with it coming on the final Saturday of the race as a 36km uphill race against the clock finishing atop La Planches de Belles Filles.

"Perhaps buoyed by Julian Alaphilippe's panache-tastic performances in 2019, the race organisers chez ASO have produced a route that favours aggressive riders," wrote Eurosport Felix Lowe in his Blazin Saddles blog reviewing the route, adding: "With the top 10 likely to chop and change most days, and the first major GC showdown as early as day four.

A mountainous opening week kicks off with a scintillating Grand Départ on the French Riviera, which includes a second stage to and from Nice that includes more climbing than ever seen before at such an early point in the Tour. For the first time since the high mountains were introduced to the Tour in 1910, this is an edition that does not feature one of the legendary ascents of the Tourmalet, Aubisque, Aspin, Ventoux, Galibier or Alpe d'Huez.

Lowe added: "Nine potential bunch sprints should suit the sprinters – including two stages in week two which are entirely flat, most notably an unprecedented leg between two islands, which could be animated by strong crosswinds coming off the Atlantic."

Stage 17 is the Queen Stage with an ascent of the Col de la Madeleine prior to a summit finish on the purpose-built cycling road on the Col de la Loze.

Although there are no summit finishes in the second week’s visit to the Pyrenees the riders visit the summits of six major climbs across just two days during Stages 8 and 9.

What is the full route?

The full route map is below. 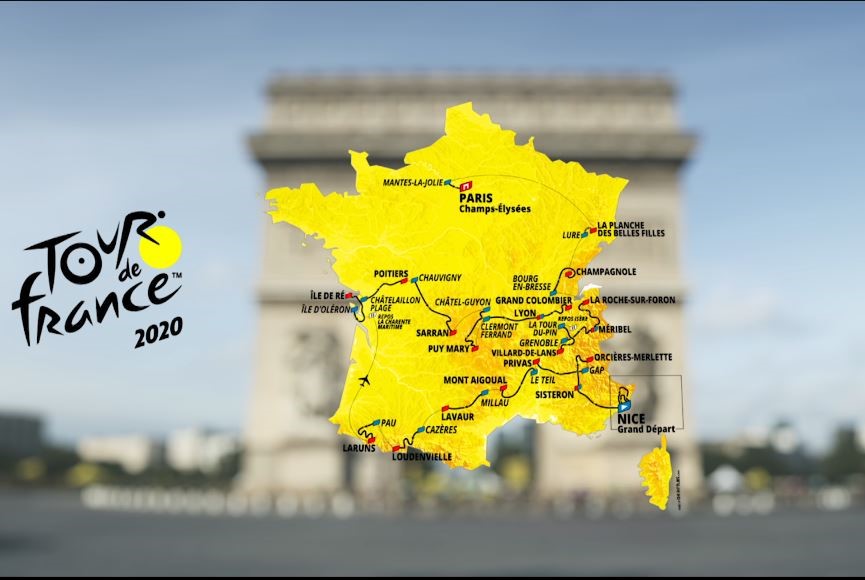 And for even more detail here is the official video of the Tour de France race route.

Who are the favourites?

The rescheduled 2020 cycling calendar has ensured an even stronger starting list for the Tour. However, with limited stage racing before the Grand Depart in Nice there will be major question marks over the form of all riders.

At the time of writing the riders below are the current favourites, although this is the hardest Tour to call for many years: