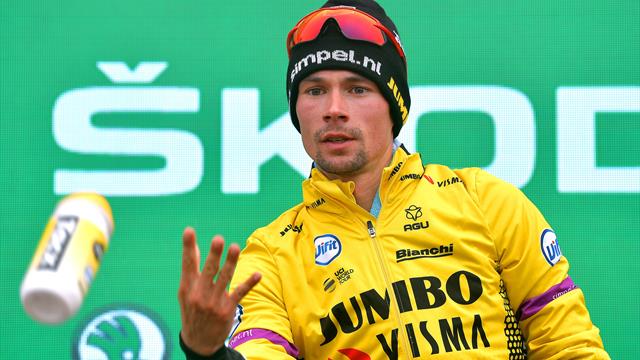 Team Jumbo-Visma have confirmed a contract extension with star rider and current La Vuelta leader Primoz Roglic, keeping the Slovenian at the team until 2023.

The 29-year-old Roglic is emerging as a leading name in the sport after excelling at the Giro d’Italia earlier this year before putting in an even stronger showing so far at La Vuelta, appearing to learn from the mistakes he made late on in the Italian Grand Tour.

And Jumbo-Visma’s decision to tie Roglic down to a big contract underlines their status as the biggest challenge to Team Ineos in professional cycling, following the news last month that Tom Dumoulin will be joining the team for the 2020 season.

In an official statement, Roglic said:

" I like the way this team works. I am enjoying being part of it. It's all about collaboration. Together we can achieve great goals. As a cyclist, I entered this team as a relative beginner and I have developed with the help of the team. I received opportunities and support. It all went quickly. For me, but also for the team. We have now reached a nice level together and I really believe that we can achieve even more. I have won some races in recent years, but you always aim for more and for the highest."

"We are still improving and our best has not yet been reached. The team and I have brought each other to a higher level and that really gives me a feeling of connection. We want to get the best out of me, but also out of the team. Only then will we see how far we can really get. We insist on growth and development. We will continue to invest energy in this, even if it is a process of years."

And sporting director Merijn Zeeman added: "We are proud and happy that Primoz will stay with our team. It is a reward for all the hard work of many people in recent years. Primoz has developed enormously in recent years as a person and as an athlete, just like the team. In the coming years we will continue to jointly focus on growing and getting better in all possible areas.”

Roglic's contract extension further strengthens Jumbo-Visma's hand and adds weight to the argument made in this week's Bradley Wiggins Show podcast that the Dutch outfit can overhaul Team Ineos as the leading team in the sport.

“They were the best team in cycling 20-25 years ago. Buckler were perfect weren't they?" Wiggins said. "It's an amalgamation of the team, but a lot of the guys - Frans Maassen, Nico Verhoeven, Addy Engels - they all came [through]. And then it went to Rabobank of course, and Rabobank at one time, although they didn't win Grand Tours they were a big, big team so it's no wonder that if you have that talent there.

“They have the beauty of having someone (Roglic) so raw as a team leader, they haven't bought someone in like a Nibali, who has got his own way of doing things. I think that has helped them as well.

“They are also profiting from the talent in Dutch cycling. Britain have benefited from that in having all the best riders in Sky and Ineos and Dutch cycling, and we are almost talking about it like a negative, 'oh Tom Dumoulin's going next year' but they are entitled to have him.

“Ineos would take a British rider, they tried to get Simon Yates of course, and Dutch cycling are quite an advanced a nation in terms of technology and university and sports science you know, so good on them. It's about time as well… you can imagine them building a Dutch squad of some talent there.”