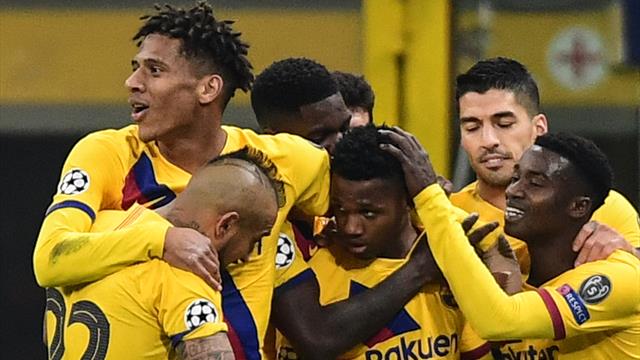 Inter started the night in pole position with a win or matching Borussia Dortmund's result against Slavia Prague set to be enough to send them through.

With no Lionel Messi, Gerard Pique or Marc-Andre ter Stegen and Luis Suarez on the bench, Antonio Conte's side should have been good enough but the young Barcelona side were typically confident in possession and took the lead midway through the first half.

Antoine Griezmann's ball into the box for Arturo Vidal was nudged by Diego Godin into the path of Carles Perez who coolly slotted the ball home. Inter really pressed in the closing stages of the half and got reward when Romelu Lukaku, who dallied a little when presented a gilt-edged chance earlier in the half, took advantage of superb lay-off from Lautaro Martinez and drilled an effort home that deflected off Samuel Umtiti.

In the second half, Inter had a number of chances with Martinez twice having goals, rightly, ruled out for offside and going close on other occasions.

As Inter got more desperate they were more open on the break and they were punished when Ansu Fati exchanged passes with Suarez before hitting a perfect low drive from 20 yards, that barely looked a chance, off the post and in.

Inter do a 'Devon Loch' again. For the second year in succession, Inter were in position to go into the Champions League last 16 with a home win. Last year, only managing a draw at home to PSV Eindhoven which allowed eventual finalists Tottenham to take their place in the knock-out stages. This time around it is Dortmund who were gifted the golden ticket.

As well as Antonio Conte has done in the league this will be a black mark against him. Inter were far from poor and threatened throughout in a pulsating game but really should have put the inexperienced Barcelona defence to the sword.

MAN OF THE MATCH

Lautaro Martinez (Inter). It might seem strange on a night where his team desperately needed his goals but the Argentine looked a class above any other player on the pitch - at least until Barcelona's late substitutions. His strength and intelligence in being able to turn defenders to win the ball and set up his strike partner is a rare gift and on two occasions he went close to scoring the goal of the round creating chances for himself out of nothing. It is no wonder Barcelona have their eyes on him.

11' CHANCE! Great chance for Lukaku, he turned inside Umtiti but Lenglet's despairing challenge spooned the ball away from the target.

19' SAVE! Good save from Neto on his debut. Umtiti looks well out of his depth, muscled out by Martinez, who moved the ball inside to Lukaku, he fed Biraghi and his fierce strike, albeit at a nice height, was parried away.

25' GOAL! Inter 0-1 Barcelona (Perez). Carles Perez scores after Griezmann drills the ball into the box aimed at Vidal and he and Godin battled for the ball which ricocheted into the path of the young striker who made no mistake.

35' SAVE! Good stop by Neto. Martinez takes a speculative ball down brilliantly jumping and stretching out his left foot and then drills a shot in that the reserve keeper pushes away at his near post.

44' GOAL! Inter 1-1 Barcelona (Lukaku). Drilled home by Lukaku from 25 yards, a slight deflection off Umtiti which may have diverted the ball away from Neto. Superb play from Martinez in the build up, turning Umtiti and holding him off the ball before laying it to his strike partner.

72' ALMOST! So close from Martinez. He really is an incredible player. Lukaku flicks the ball over his head for him to run onto, but he had to go towards the touchline to retrieve it, then he lobs the ball over his and the defenders head before shooting just wide of the target.

87' GOAL! Inter 1-2 Barcelona (Fati). Lovely strike from the wonderkid, perfect layoff from Suarez and with little obvious opportunity he becomes the youngest scorer in the Champions League and sends Inter out of the competition.