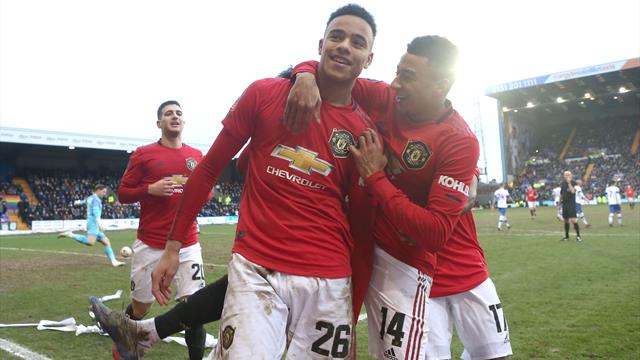 Manchester United eased into the fifth round of the FA Cup with an impressive 6-0 win over Tranmere Rovers at a muddy Prenton Park.

Harry Maguire opened the scoring with a rocket from distance and Tranmere were shell-shocked when two minutes later Diogo Dalot doubled the visitor’s lead with a fine finish of his own.

The game was dead and buried inside 16 minutes when Jesse Lingard curved into the bottom corner, and Phil Jones and Anthony Martial got in on the act before half-time in a productive first 45.

United eased off their League One opponents in the second half but still found time for one more as Mason greenwood dispatched a penalty after substitute Tahith Chong was brought down by Scott Davies inside the box. And Chong almost scored himself but rattled the underside of the bar with a rasping effort from close range.

United coasted to the finish line and managed to escape unscathed and with plenty of confidence after overcoming a real potential stumbling block.

Shaw and Dalot caused chaos on the flanks as Tranmere desperately struggled to deal with the wide threat while keeping tabs on the men in the middle. That gave United so much space through the centre because the hosts were unable to get bodies in the way of the United efforts. If Solskjaer was experimenting here it’s worth giving it a go in the Premier League too.

MAN OF THE MATCH

Harry Maguire (Manchester United): Started the frenzy with an absolute rocket and played as an attacking midfield at times, surging at the Tranmere defence and always looking to go forward. Lead by example as captain.

10’ - GOAL! Maguire settles the nerves with an ABSOLUTE ROCKET!

25 yards out, he puts it on his right foot and his strike finds the top corner via a slight deflection of Clarke's head.

A captain's goal. That settles nerves.

The defender twists and turns into the box before sending an absolute rifle into the corner. Unstoppable.

16’ - GOAL! Lingard with third and it's another glorious goal!

Maguire drives at the heart of the Tranmere defence before laying off Lingard right on the 18-yard box. He bends it into the bottom right corner.

The defender guides and excellent looping header over towards the far post from a corner and the ball finds the back of the net.

45’ - GOAL! Martial finally gets on the scoresheet!

It's a classic bender into the top corner, via a small deflection of Morris. No chance for the keeper.

57’ - GOAL! Greenwood dispatches the penalty after Chong was brought down by Davies! That's six!

The youngster fought for the right to take that pen. Hungry for goals.

85’ OFF THE BAR! Chong rattles the underside of the bar with a belter inside the box. Almost a seventh!

Manchester United have netted five goals in the first half of a game for the first time since February 2001 (6-1 v Arsenal) - current manager Ole Gunnar Solskjær scored the fifth goal for the Red Devils that day. Update.