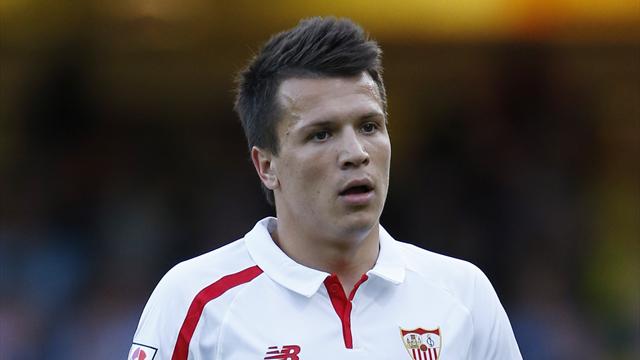 Sevilla put themselves back in the picture for Champions League qualification, seeing off nine-man Valencia 1-0 at the Ramon Sanchez Pizjuan.

Unai Emery's side dominated the contest, although weren't quite as productive in the final third as they would have liked. But Valencia never threatened - failing to notch even a single shot on goal over the course of the 90 minutes.

Valencia manager Nuno later resigned having endured a difficult season with the Mestalla club. The defeat wasn’t the most damaging thing for the visitors, but the manner of the defeat.

Sevilla could have scored more than the one they did register, with Yevgen Konoplyanka and Mariano Ferreira the most dangerous players on the pitch. Matt Ryan was perhaps the only Valencia player to come out of the game with any credit.

29’ FIRST REAL CHANCE OF THE MATCH! Mariano squares a pass across goal on the stretch, but Llorente scuffs his shot and Vitolo can't turn it in at the back post. That should be 1-0 to Sevilla.

35’ SENT OFF! Joao Cancelo (Valencia). The full-back receives a second yellow card for sending an arm into the face of Konoplyanka.

39’ SANTOS NEEDED TO MAKE THAT BLOCK! Konoplyanka hit that shot from 16 yards flush, but the Valencia defender was on hand to stop it from reaching his goalkeeper, Ryan.

50’ GOAL! Sevilla 1 Valencia 0: They finally have the breakthrough! Banega finds Escudero at the back post with an exceptional pass and the Sevilla player volleys it home on the slide. Excellent goal!

59’ STRONG APPEALS FOR A PENALTY KICK! A header appeared to strike the arm of Fuego inside the penalty area, but the Valencia player knew nothing about it and the referee waves away the claims.

61’ RYAN HAS TO MAKE THE SAVE! Mariano gets in behind his marker, latching on to a pass that made the most of the space, but the Valencia keeper makes the diving save to deny him.

65’ KONOPLYANKA HEADER IS SAVED BY RYAN! The winger had more space inside the area than he realised, and his header - which was rather tame in the end - was saved by the Valencia keeper.

68’ HE SHOULD HAVE DONE BETTER WITH THAT! The ball falls to N'Zonzi at the back post, who has time to settle himself before the shot, but his effort is wild and flies over the bar.

77’ SHOULD THAT HAVE BEEN A PENALTY KICK? Konoplyanka is down and was felled by the challenge of a Valencia defender as he squared the ball. It was a late challenge from Vezo.

79’ SENT OFF! Javi Fuego (Valencia). Things just go from bad to worse for the away side, who have now been reduced to nine men.

83’ GOOD SHOOTING CHANCE FOR KONOPLYANKA! The winger drifted inside off the left wing and created the space for the shot, but Ryan is behind the effort and makes the save.

Valencia have received more red cards than any other La Liga side since the start of last season (in all competitions), with 14.

Valencia failed to record a single shot on goal against Sevilla.

Valencia became the first team to have a player sent off in the same stadium in six consecutive seasons.

TALKING POINT - What now for Valencia?

Pressure was already building Nuno before this game, with Valencia underperforming in both La Liga and in the Champions League. His resignation leaves the club in a state of disarray. Who can they turn to now? Phil Neville may take over on an interim basis but is no long term solution. Sevilla offer something of a yardstick for Valencia - with both sides aiming for the Champions League places - but the home side were completely dominant and better than the 1-0 scoreline suggests.

MAN OF THE MATCH - Yevgen Konoplyanka

The Ukrainian was signed as a free agent during the summer and must go down as one of the signings of the season. Konoplyanka was at the heart of everything good Sevilla did, essentially prompting the sending off of Joao Cancelo, who simply couldn’t deal with him on the left wing. Liverpool fans must have watched the performance of the winger with so much regret. He could have been a Red.