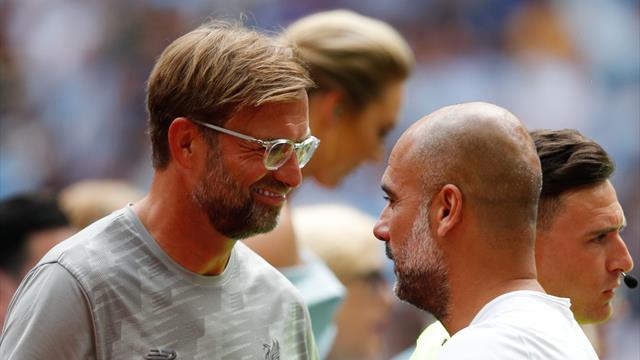 Liverpool’s match against Manchester City will have some bearing on which way the Premier League title goes, but a home win would not end the race by any means, writes Michael Hincks.

Expect to hear the phrase “one hand on the Premier League trophy” this weekend. Almost definitely before Liverpool welcome Manchester City to Anfield on Sunday, while it’s a near-certainty after, should the hosts take all three points.

A win would take Liverpool nine points ahead of City going into the final international break of the year, and have Reds fans believing that this really is the season they end what would be a 30-year wait for league glory.

But football is never straightforward, and whether the gap is extended, cut, or kept at six, this will not be the match that decides the title…

Video - ‘Even the hotdog sellers have to be in top shape’, says Klopp ahead of Man City showdown

Yes, essentially, and it’s borne from the fact these two are streets ahead of the chasing pack.

Both clubs may have a greater disdain for Manchester United, but the post-Ferguson struggles at Old Trafford have led to Liverpool-City clashes emerging as the most eagerly anticipated affairs in the Premier League.

"In the last two years each game we play is the most decisive. Not one where anyone says 'we can lose that'," Klopp said.

Video - Klopp hits back at Guardiola: Mane is no diver

"Everything is on a plate, nobody hides anything. If you're not brave against Man City you don't have the chance of even a point. You have to create, but your positioning and protection must be perfect.”

Their last league meeting in January proved to be a pivotal one in the title race, as City – aided by a John Stones clearance 11mm before the ball crossed over the line – closed the gap to four points when Liverpool led the way at the turn of the year.

City went on to win the title by a point, with Liverpool’s only league defeat of the campaign coming at the Etihad.

And while that loss reeled Liverpool in, it was ultimately a run of four draws in six games between late January and early March which saw them lose their grasp on the title.

Similar margins will be at stake on Sunday, but there are significantly more games too. No game coming in the 12th matchweek can be labelled a title decider.

For Liverpool, there is a hectic schedule on the horizon. Two tournaments in two continents within the space of 24 hours encapsulates this manic period, but while they will have two squads heading to Birmingham and Qatar separately, it will take a collective effort to tackle the festive calendar as far as the league is concerned.

City meanwhile, host Chelsea immediately after the international break and then take on United at the Etihad in December before the Christmas fixtures pile up – which includes matches at home to Leicester and away to Wolves.

If we are looking at potentially crucial moments in the league calendar, it is difficult to look past City’s run of games in early 2020.

Pep Guardiola’s side are set to face Tottenham and Leicester away before hosting Arsenal in February before then travelling to Manchester United and Chelsea in March.

That all comes before City v Liverpool at the Etihad in early April. Tantalisingly placed as there will be six matches left each afterwards.

It’s safe to say that match has the makings of a title showdown, but how things will be shaping up by that point is anyone’s guess.