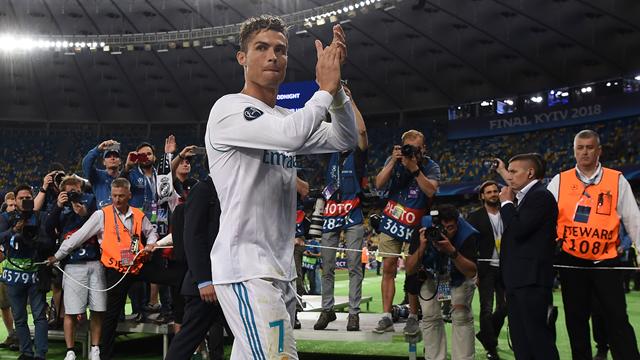 The World Cup is at the business end, but Cristiano Ronaldo stole the headlines on Tuesday after completing his £105m move from Real Madrid to Juventus.

It brings to an end a long list of eye-watering statistics from his nine-year stint in the Spanish capital. A staggering 450 goals in 438 games, but his fitting final act was lifting the Champions League trophy for a fourth time as a Madrid player at the Olympic Stadium in Kiev.

Ronaldo immediately sparked rumours of his departure in the aftermath of the 3-1 victory over Liverpool, and while he moved to clarify his comments ahead of representing Portugal at the World Cup, Madrid have now confirmed his pending departure.

Countless records were broken by the Madeira-born star since joining from Manchester United for £80m in 2009, becoming Madrid’s all-time top scorer in October 2015 when he netted his 324th goal in the 3-0 win over Levante in La Liga.

Ronaldo celebrates his milestone strike against Levante in 2015Getty Images

He has since gone on to score 126 more times for the club, while his 85 strikes for Portgual make him his country’s all-time leading goalscorer. Courtesy of our good friends at Opta, we take a look some of those other impressive numbers from Ronaldo’s time at Madrid: