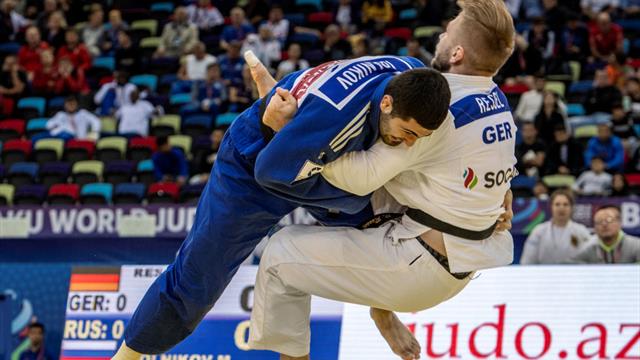 The stakes were high at the weekend’s IJF Grand Slam event in Baku, Azerbaijan with World Championships and Olympic qualification very much in everyone’s mind.

The Heydar Aliyev Sport Hall in Baku was the venue for what was the last major stop on the IJF World Judo Tour prior to the World Championships in Tokyo.
A total of 431 athletes – 256 male and 175 female – from 56 countries battled it out for medals and ranking points, and the action over the three days did not disappoint.

Friday’s first day of action was a glorious one for Brazil but a frustrating one for Japan.

There was an all-Spanish final in the women’s -48kg event as Junior World Championships bronze medallist Laura Martinez Abelenda defeated Marrakech Grand Prix winner Julia Figueroa to strike gold on the IJF World Judo Tour for the first time. It took the youngster only 37 seconds to secure victory by throwing her teammate and two-time Grand Slam winner with a thunderous o-soto-gari for ippon.

Five-time Grand Prix winner Amandine Buchard of France claimed the -52kg title and her first Grand Slam title at the expense of Japan’s Ai Shishime, as the unfortunate former world champion picked up a knee injury during their final and could no longer continue.

Brazil’s Olympic champion Rafaela Silva claimed the -57kg category honours as the 2013 world champion defeated reigning world champion Tsukasa Yoshida for the first time. The latter, who led their head-to-head series 3-0, was the favourite to win in Baku but Silva pounced with 15 seconds left for a waza-ari score to claim her 12th Grand Slam medal but first gold.

In the men’s -60kg Final, Felipe Kitadai achieved a career first as the veteran Brazilian ended an IJF competition day with gold for his country. After earning three Grand Slam silver medals, the London 2012 Olympic bronze medallist, who was ranked a lowly number 33 at the start of the day, brushed aside Georgia’s Temur Nozadze to win by two scores and secure gold.

Paris Grand Slam winner Denis Vieru of Moldova won his second Grand Slam title of the season as he defeated Azerbaijan’s Nijat Shikhalizada in the -66kg Final. The 23 year-old planted the veteran Azeri, 31, for ippon to win his third IJF event of the season from four outings and propel himself even higher on the next World Ranking List.

After their frustrations on day one, Japan came away with two gold medals on the second day of action.

The first came in the women’s -63kg Final as three-time world medallist and Japanese number one Miku Tashiro extended her perfect winning record over Olympic champion Tina Trstenjak of Slovenia. Tashiro forced Trstenjak to pick up two shidos and swiftly subdued the owner of the gold -63kg backpatch with a juji-gatame.

The second Japanese gold came in the -70kg Final as two-time and reigning world champion Chizuru Arai won her sixth Grand Slam gold medal at the expense of Sweden’s Anna Bernholm. Arai threw the Swede with a o-soto-gari for a waza-ari score and held her down for 10 seconds to continue an unbeaten record on the IJF circuit which stretches back to May of last year.

Hidayat Heydarov won his home Grand Slam for the first time as he beat Israel’s Tohar Butbul in a nervy men’s -73kg final. Using the home advantage and backing of the crowd, the former European Championships gold medallist won his first IJF World Judo Tour medal after he was awarded the win; Butbul being reprimanded with this third shido for passivity after three and a half minutes of golden score.

In the men’s -81kg Final, Israel’s Sagi earned his fourth Grand Slam gold medal and third this season with a calculated victory over Bulgaria’s Ivaylo Ivanov. The Israeli judoka delivered once again as he launched his Bulgarian rival with a huge hip throw for ippon in golden score.

The final day of action was highlighted by a shock in an all-German women’s gold medal decider and a junior world champion coming of age for Georgia.

The shock came in the women’s -78kg Final as World number 12 Luise Malzahn beat Antalya Grand Prix winner Anna Maria Wagner. Germany’s 21-time Grand Prix medallist recorded her first international win over Wagner in comprehensive fashion with a harai-makikomi and a o-uchi-gari to earn her second Grand Slam title against her younger, more fancied teammate stunning, with the world number eight now facing a battle on her hands to be picked for Tokyo 2020.

In the +78kg Final, Yelyzaveta Kalanina won her maiden Grand Slam title with the best display of her young career. World Judo Masters bronze medallist Larisa Ceric of Bosnia was thrown by the tallest judoka in the category and denied a second Grand Slam crown by the first-time Grand Slam finalist.

The -100kg Final saw Tbilisi Grand Prix gold medallist Michael Korrel clinch a Grand Slam hat-trick by defeating Russia’s Kazbek Zankishiev The Dutch star prevailed after 68 seconds of golden score as he dropped under the Russian for a waza-ari score.

Junior World Championships gold medallist Gela Zaalishvili made an impression on the IJF World Judo Tour to open his senior medal account on the international stage when winning the +100kg Final. The Georgian countered a sasae-tsurikomi-ashi attempt from Russia’s Ruslan Shakhbazov with te-waza for a waza-ari score and added a second waza-ari to seal a decisive victory in the last contest of the Grand Slam in Azerbaijan.