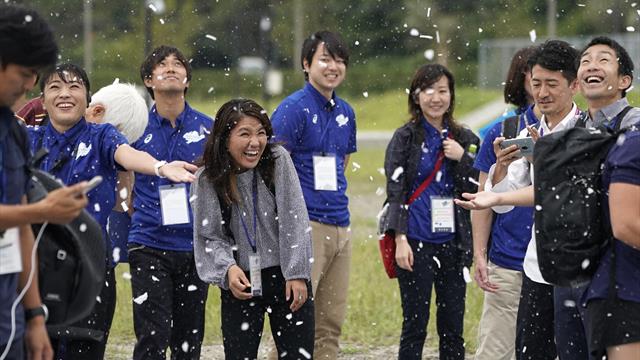 Olympic officials used a snow machine to spray a crowd of volunteers with shaved ice and slush on Friday as they tried out ways to keep spectators cool at next year's summer games in Japan.

The fake snow arced high into the air before showering down at the trial in Tokyo - one of a series of measures being considered to combat humidity and temperatures that regularly top 30 Celsius in July and August.

Some in the crowd grimaced as the snow came pelting down, but most seemed to enjoy it.

"The organising committee want to try all we can to mitigate the heat, and this is one of the ideas that we came up with," said Taka Okamura, a senior director at the Tokyo 2020 Organising Committee.

"It isn't going to lower the air temperature, but hopefully the ice will make the people it hits feel cooler."

Staff fed blocks of ice into the back of the snow machine mounted on a truck at a canoeing event in the capital. It lobbed 300kg of slushy snow at the 150 volunteers over five minutes.

Other ideas already tried out at other events include vapour sprays, shaded or air-conditioned rest areas and the distribution of water and ice packs.

Okamura declined to say how much it would cost to deploy snow machines across the whole games and said tests were ongoing.

Organisers have said they will start marathons at 6 a.m. to avoid midday heat. Major roads on much of the 26-mile (42 km) route will be painted with a resin designed to reflect infrared rays and cut temperatures by as much as 8 Celsius.

At a beach volleyball test event this July the wet bulb globe temperature (WBGT), which factors in temperature, humidity, wind speed and solar radiation, rose as high as 31.7, exceeded the 31 threshold at which authorities advise citizens against exercise.

Last month, heat concerns prompted the International Triathlon Union to shorten the distance of the run segment in a qualifying event in Tokyo for the July 24-Aug. 9 Olympics.

Athletes competing in the 2019 World Rowing Junior Championships were treated for heatstroke several days before that decision.

At the canoe event on Friday, the temperature was a pleasant 25 degrees before the snow machine was turned on. (Reporting by Tim Kelly; Editing by Andrew Heavens)