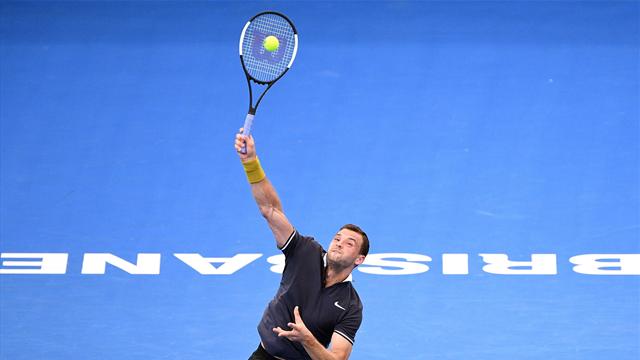 Grigor Dimitrov scraped off the rust in his game to overcome Japan's Yoshihito Nishioka 6-3 6-4 and move into the second round of the Brisbane International on Monday.

The Bulgarian, who struggled with an ankle injury towards the end of last season, saved six out of seven break points to down his unseeded opponent in the season-opening tournament.

"I felt I was actually hitting the ball quite all right for our first match of the year," former world number three Dimitrov, who has slipped to 19th in the rankings, said.

"The only thing I can do is play as many matches as I can, and only then I can again establish myself as that top player.

"Considering how the past five months have gone for me, there's areas that I need to focus on... to get back to the level that I was."

Up next for the 2017 champion is Australia's John Millman or American Tennys Sandgren.

The big-serving Milos Raonic, another former world number three who slid down the rankings last season to sit one place above Dimitrov, fired 18 aces in his 6-0 6-3 win over Slovenia's Aljaz Bedene.

Video - Dimitrov: Things have been a little rough for me

Canadian Raonic, the 2016 winner in Brisbane, next takes on qualifier Miomir Kecmanovic.

Among the women, 2017 winner Karolina Pliskova rallied from a set and a break down to beat Yulia Putintseva 4-6 6-3 6-4.

"It's always tough to play a first match after one-and-a-half months of preparation and some holidays, so I'm just happy that I'm through," Pliskova said.

"I played good in practice, but still, a match is something different. I'm happy I managed to fight in the second set after being a break down. It was a very important match for me."

Wildcard Kimberly Birrell fought back from 3-5 down in the decider to stun Russia's world number 10 Daria Kasatkina 5-7 6-4 7-6(3) for her first win over a top-10 player.