Tsitsipas progresses in Rotterdam, Fognini out 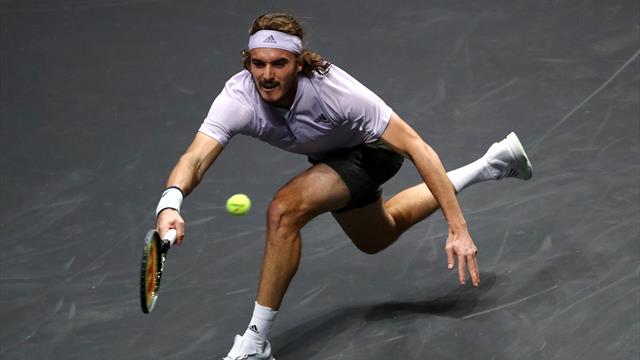 Second seed Stefanos Tsitsipas clawed his way back from a set and a break down to beat Poland's Hubert Hurkacz 6-7(2) 6-3 6-1 and reach the last-16 of the Rotterdam Open on Tuesday.

Tsitsipas reacted well to going 2-0 down in the second set, fighting back strongly to beat Hurkacz, who was celebrating his 23rd birthday.

The Greek big-hitter, who was knocked out in the third round of the Australian Open, has now beaten Hurkacz five times out of six, although this was another close encounter between the pair.

Tsitsipas needed a medical timeout to deal with a shoulder problem after making unforced errors in a poor tiebreak, and Hurkacz quickly stole a march in the second set before Tsitsipas launched his comeback.

The world number six broke to go 3-2 up and went on to take the set in 46 minutes, before dominating in the decisive third.

Auger-Aliassime, 19, who had his breakthrough season last year when he climbed up to 17th in the rankings, nearly threw it away in the second set against Struff when he lost five games in a row before he regained his composure in the final set.

"It was really tough, there was so many emotions running through my head," Auger-Aliassime, now ranked 21, told the ATP website. "I felt I had chances in the first game of the second set... and so many chances to make the break.

"It was really frustrating. It led me to lose focus in the second set and get broken twice, which isn't ideal for me or normal. In the third set, it was about forgetting and moving forward."

The Canadian served seven double faults but also fired 16 aces in the contest and set up a match with Bulgaria's Grigor Dimitrov, who eliminated Denis Shapovalov on Monday.

On the other side of the draw Fognini was ousted by Khachanov.

Fognini lost his focus following an argument with the umpire over a call in the second set and the Italian also asked for the trainer's help in strapping up his leg below the knee.

Khachanov sailed through the second set with two breaks of serve and Fognini's unforced error count of 36 only made things easier for the Russian.

Meanwhile, Andrey Rublev knocked out Nikoloz Basilashvili 6-2 6-3 in what was the shortest match of the first round, with the 22-year-old wrapping up the encounter in only 55 minutes after winning 91% of his first serve points.

Rublev's record is 12-1 this year, having won titles in Doha and Adelaide and losing only at the Australian Open in the last-16 to semi-finalist Alexander Zverev.