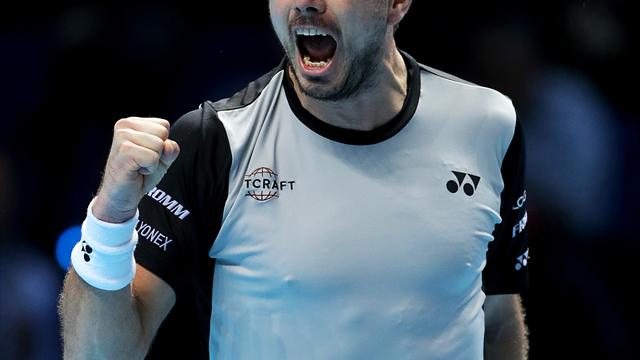 Three-times grand slam champion Stan Wawrinka, on his way back after undergoing knee surgery last year, was in upbeat mood despite losing in the Sofia Open semi-finals on Saturday.

The Swiss believes he needs more time to reach full fitness after going down 7-6(6) 6-4 to Bosnia’s Mirza Basic in his fifth competitive match in seven months.

Wawrinka was knocked out in the second round of the Australian Open last month, losing to unheralded American Tennys Sandgren in three sets.

“It would have been great to win one more match but I need to take the positives from this week,” the 32-year-old told a news conference.

“It was positive to have three matches in a row and win two matches. For sure it costs me more energy to win matches, since I am not used to play matches, but that is what I have to do to get back to my level.”

Wawrinka, who dropped to 15th in the world rankings in his absence from the tour, said he did not feel any pain during the tournament in Bulgaria.

“My knee's getting better,” he said. "I am really happy and positive after the surgery, it has been six months until now and everything is going really well. I think I am doing everything possible to get back to what I want to be."

Wawrinka, however, remains cautious about his prospects of a long run.

“I am moving well, I am playing well, but it is part of a process… to play more matches, to become more confident,” he said.

“There are a lot of things that you have to put together. It is not only about fitness, not only about tennis. It is also about being more relaxed while you play.”

Wawrinka will play next week in Rotterdam where he won his last indoor title in 2015.

“Tomorrow I am travelling and will try to practise there to prepare for my first match and to keep improving.”