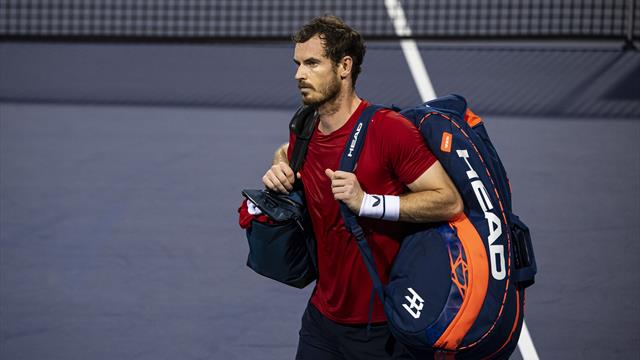 Andy Murray twice failed to serve out for the match in a fiery decider as Fabio Fognini battled to victory at the Shanghai Masters.

A day after winning his first Masters 1000 match in more than two years when beating Juan Ignacio Londero in three sets, Murray went the distance again but lost to Fognini 7-6(4) 2-6 7-6(2) in a three-hour epic.

Tensions boiled over in the final set as Murray told Fognini to "shut up" during a fierce exchange after the Italian appeared to call out when the Briton hit a volley.

The verbals came between Murray's two failed attempts to serve it out, with Fognini going on to hold his nerve and win the deciding tie-break. The 10th seed faces the winner of Taylor Fritz’s match with Karen Khachanov, which takes place on Wednesday.

Murray - set to feature at the Australian Open in January - switches his focus to the European Open in Antwerp next week.

Both players struggled on serve in the first set, and after Murray saved one break point in the opening game, the pair traded breaks in games three and four.

Murray broke again to move 4-2 up, but Fognini responded immediately before taking it to a tie-break.

Fognini led 4-2 at the changeover, but after losing the mini-break the Italian won three points on the spin to win the opening set.

An epic first game of the second set saw Fognini save two break points before holding after eight deuces.

However, Murray kept up the pressure and broke twice when winning five games in a row to take the match to a decider.

A tense final set saw Murray initially deterred by light rain before Fognini exchanged words with the umpire after a spectator called out.

Nevertheless, the decider stayed on serve until Murray broke Fognini in the ninth game, but the former world No 1 could not close out the match a game later.

Fognini levelled at 5-5 after Murray found the net, and the tension was ramped up when Fognini called out as Murray tucked away a volley.

After Murray broke to lead 6-5, he told Fognini to "shut up” during the break while he explained his point to the umpire, saying "he shouts and then tells me don't look at me".

Umpire Fergus Murphy then urged the duo to "play tennis”, with Fognini breaking back again to deny Murray and take it to a final-set tie-break.

Fognini broke early and kept his nose in front, winning the tie-break 7-2, and after the pair shook hands at the net Murray continued his protests with the umpire before walking off court.